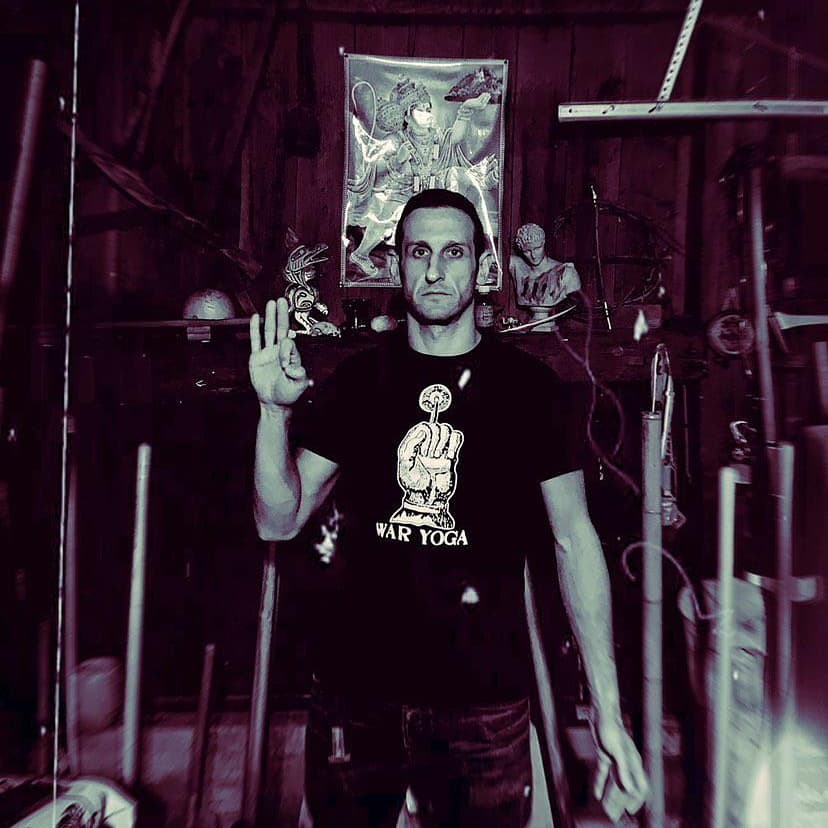 A hashtag you see when browsing through Instagram posts of people swinging maces is #waryoga – but what does it actually mean? Tom Billinge of WarYoga North tells the story.

The term WarYoga was coined by William Calvani several years ago, originally referring to Jiu Jitsu, as an in joke. Very quickly, William, who had been practicing some of the traditional elements of Indian wrestling conditioning, began to use the phrase to refer to these exercises. While William has since withdrawn from the world of social media, I and a small group of devotees have been keeping the flame burning. From 2018, William and I worked on the WarYoga project together, originally intending for there to be several affiliated akharas (strength temples) around the USA and beyond. I took the designation WarYoga North. In the absence of William, the first Guru of the WarYoga Akhara, I have continued the work and have maintained our networks and media platforms.

Vyayam is the name given to the various strength and conditioning exercises performed in the akharas of India by Kushti wrestlers. There are several elements: Bethak (Hindu Squat), Dand (Hindu Push Up), Sapate (Hindu Burpee), Gada (Mace), Gar Nal (Stone Neck Ring), Sumtola (Log Bell), Jori (Heavy Clubs), Rope Climb and Mallakhamb (Wrestler’s Pole). Not all of the exercises are performed by everybody, as some have become specialised disciplines in themselves. William and I went on a pilgrimage to India in 2019 to train at the akharas of Varanasi, where we were able to hone our techniques further with gurus from an unbroken lineage stretching back hundreds of years. For a deep dive into the akhara system in India, Joseph Alter’s “The Wrestler’s Body” is one of the finest works written on the subject.

WarYoga also incorporates concepts from traditional Indian alchemy. The body is a furnace, which  is heated through tapas (austerity). Tapas literally means heat and fire. The exercises generate heat, making the body move as a yantra (magical machine). This heat begins the inner transformation of the tapasvin (person undertaking the austerities), bringing the disparate of parts of the self to the centre. Like an alchemical furnace, the essence of the self is distilled and collected in the cranium, the condensation chamber of the body. William would often use the phrase “churning butter, making ghee.” The ultimate end is to create an adamantine vessel of moksha (liberation).

Agni, or fire, is central to the WarYoga Akhara system. The main ritual element is the Agnihotra ceremony. This ancient rite has been performed twice a day, every day, since the Vedic era, some 3500 years ago. It is an ancient Indo-European ritual, where cow dung is burned in a special bronze vessel at sunrise and again at sunset. Ghee and whole rice grains are cast into the fire while chanting the appropriate mantra. Like the recitation of the Vedas themselves, this ritual sustains the universe. When the Vedas and the rituals cease, so does existence.

The mitti (sacred earth) of the wrestling pit is also a key part of the WarYoga Akhara. While we were in India, William and I brought back some of the earth from several ancient akharas. This mitti has been turned daily for centuries. It has been purified countless times with ghee, turmeric, sandalwood, rose petals and neem leaves. It has had the sweat and blood of wrestlers poured into it, as they fought in it, since the akharas were founded hundreds of years ago. We added our sweat and blood to the wrestling pits while we were in Varanasi, but we also brought back mitti that is charged with “phoorti” – the electric energy that courses through the wrestler’s body. The Indian mitti has been added to our own earth, creating wrestling pits that are connected to each other and to those that are in India.

We continue the daily work. We refine our techniques and philosophy. We cultivate ourselves and connect with those who are on the same journey. WarYoga is not just a catchy hashtag, it is a system of purification that involves specific exercises, internal alchemy, ancient Indo-European ritual and the practice of true magic. One of the last things I worked on while William was still a public presence, was the WarYoga North Manual. William proofread the first version for me. In 2021, I will publish the manual, which will include the exercises, how to make the equipment, a detailed look at the philosophy behind the system and a deep dive into the ritual aspects. The WarYoga North Manual aims to continue the work begun by William, as well as ensuring WarYoga is not corrupted into a soundbite that sounds cool on social media.

Follow @tombillinge for more WarYoga information and his other projects, including his upcoming book: Undying Glory, The Solar Path of Greek Heroes