The word “German” has an elusive etymology, but it is possibly related to a Celtic root that means “neighbor”[1]. As such, we can verily examine the Celts and Germans as having been long-time neighbors. While it would be easy to identify the Rhine as the main border between those two, the Celts were in fact living in what is today Germany for most of the Bronze Age, Hallstatt Iron Age and La Tène Iron Age. It is only when Germanic migrations from the Jutland peninsula in approximately the middle of La Tène era that we start to see Germanic populations migrate deeper in today’s Germany.

Maximum expansion of the La Tène culture. Please note artifacts can be found farther away from these zones because of trade.

These migrating populations would not have been strangers to Celtic culture; La Tène artifacts are found across Germanic land, and even in Poland and Ukraine. It was a highly prized material culture that radiated in Northern and Central Europe. One good example of this is the Gundestrup cauldron. Made by Thracian artisans, the silver cauldron depicts scenes that are unequivocally Celtic[2], and was ultimately found buried in Denmark. These Iron age Danes probably would not have understood all the scenes on the cauldron but kept the cauldron because of its high value.

Taranis on the Gundestrup cauldron with typical Gaulish iconography of the cart wheel, ram-headed serpent and torc.

As neighbors, and long-time interacting trading partners, we would not be surprised to see many parallels between Germanic and Celtic cultures. I will attempt here to draw parallels between their deities. Many scholars have been studying this subject in the domain we call comparative mythology. Apart from comparative mythology, we can also find evidence in what I find to be more of a “jungian”, collective unconscious process in which the different cultures have assimilated deities together. We can see this in how the Gauls added Roman deity names to their native gods, creating deities like Belenus Apollo and Mars Camulos. Another kind of evidence is seen for example, in the names of the days of the week: Tuesday comes from Tiw’s day, or Tyr’s day, and that god was thought to be like Mars so that Tuesday is the same as the French Mar(s)di. That is not the work of specific scholars in an academic setting, but that of a more unconscious process that comes from society itself.

Before stepping into this project, I must specify a more precise culture than just “Celtic” and “Germanic”. I will use the Norse deities in the Germanic side, because they are those that we know most about. As for the Celtic side, I will use mainly Gaulish deities. But please know that Gaul was not a unified entity, and we see as many names for their deities as there are Gaulish tribes. It is possible that these multiple names are all unique gods and goddesses, but there is another distinct possibility Gaulish deities had different names depending on their role or where they were worshipped. They were possibly nicknames in a way. The complicated art in studying the Gaulish pantheon is to know when to see different deities or multiple names for the same god.

Since the introduction to the project I will have on the website has already taken some space on this article, I will start with a fairly simple deity with a clear iconography and evident parallels: Thorr

There is no doubt here that Thorr’s Celtic equivalent is Taranis. Both names mean “The Thunderer”, and Taranis is found across Gaul, albeit with some differences in his name, with the most common being Taranus, but I will use Taranis in this article for it is the most known form nowadays.[3] The Thunderer divine archetype is also seen in the Slavic Perun and Baltic Perkunas. The difference between this Indo-European archetype and that of Zeus and Jupiter is that Zeus and Jupiter are both descended from the Proto-Indo-European root “*Dyeus” meaning day sky, while the Thunderer’s name either comes from a root simply meaning “thunder” or a root meaning “oak tree”.  The Thunderer deities are also deities of fighting; they are courageous, they protect the common folk and slay monsters. They are also great drinkers, and red-haired. This is not something we see with Zeus and Jupiter, who are though instead to be arbitrary father gods of ruling[4].

The biggest difference between Thorr and Taranis is that Taranis does not have a hammer or another percussive instrument. In his representations, we see him holding a lightning bolt like Zeus’[5] in one hand, and a chariot’s wheel in his other hand. The wheel can have a varied number of spokes, and we see their miniature bronze versions deposited as votive offerings or worn as pendants. It is, for what I understand, a great misconception to think Taranis’ wheel is the wheel of the year, as the wheel of the year has 4 or 8 spokes, representing seasons, while Taranis’ wheel can have 5, 6, 9 or any number of spokes.  But this does not mean that the wheel cannot represent order and the passing of time. His wheel is the iconographical remnants of his chariot. The Thunderer, whether it is Perun or Thorr, rides a chariot across the sky. The chariot’s wheels are noisy, and that sound is the thunder we hear. The reason for the Celtic god’s disappearance of the chariot is due to the great popularity of cavalry amongst the Gauls, to the point that they thought it would be better to have Taranis ride a horse. Thus, we see Taranis riding a horse, holding the lightning bolt in his hand and the wheel in his other, on top of the so called “Jupiter columns”, monuments erected in the Rhineland, when its native population was Celts that were recently romanized.

A late representation of Taranis, with the Roman influences showing in the toga and possibly the lightning bolt as well. 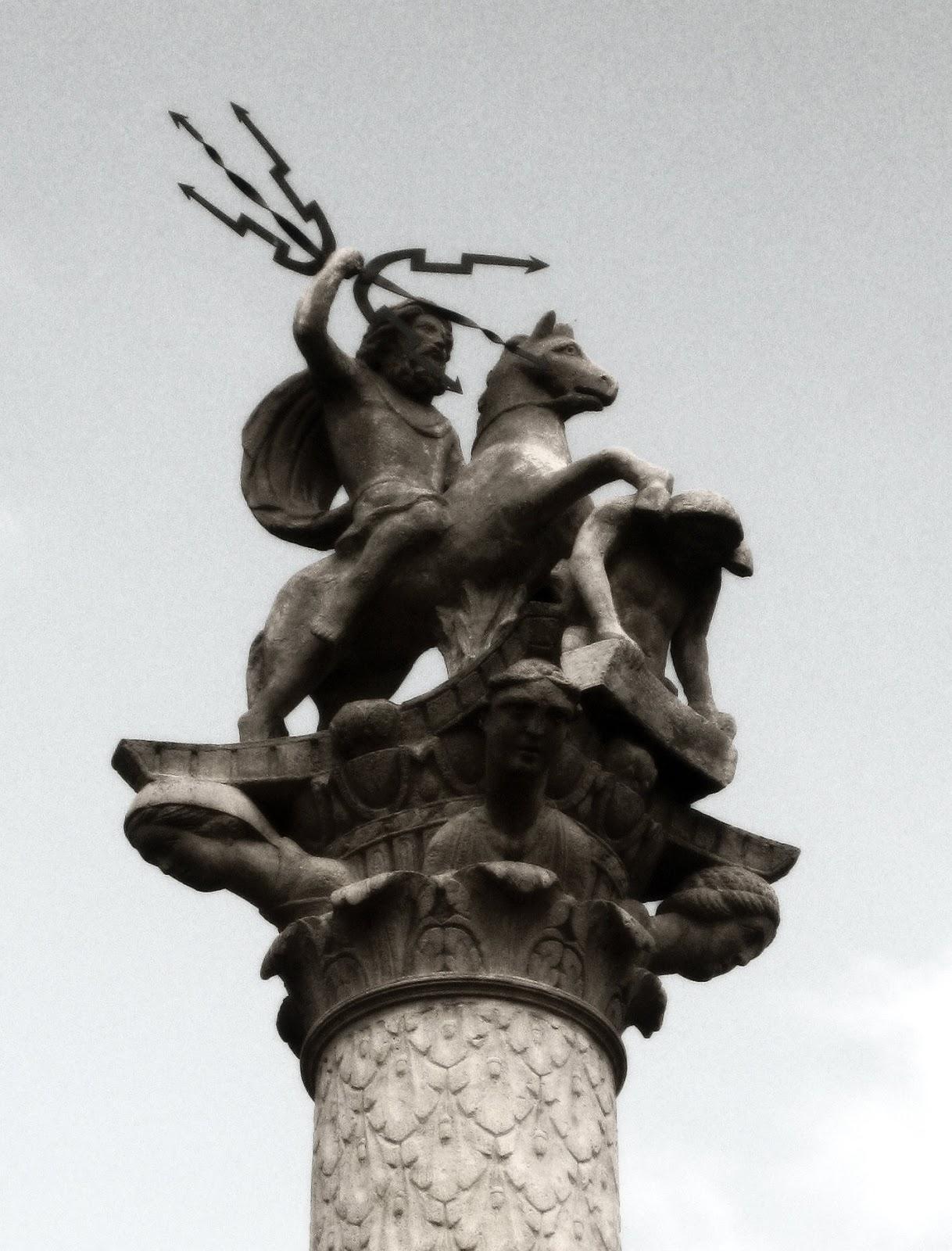 Example of a Jupiter column from Köngen. The trend of representing Jupiter riding a horse, defeating a giant, wielding a thunderbolt and occasionally a cart wheel in his other hand is thought to come from Celtic tradition and syncretism with the god Taranis. We never see the Roman Jupiter riding a horse, nor the Germanic Thorr.

[2] The cauldron depicts many Celtic gods that I will describe. There is no way the depictions are of Germanic or Thracian deities, for the iconography is quite clear. A whole article could be written on the cauldron.

[4] The three classes of Indo-European are: deities of ruling, deities of fighting and deities of producing. Zeus/Jupiter/Dyeus rules, while Thorr, Taranis and Indra fight, though they can also be kings in their own ways, they do not decide on the rules of the universe.

[5] Though this could be from Roman influence.

32 thoughts on “Germanic deities and their Celtic equivalents”