:Cult of The Solar King:

You are not a man, but a living world of interacting archetypes, struggles, Gods, and beasts.

Any fool can look at the waking world – our collective cosm built by all – and see problems with it. It’s no secret that many are miserable, and much injustice still runs amok.

This is easy to say, and there is no kickback from me claiming this.

Anyone can say “Yeah dude, the world’s gone crazy.”

But, until you realize this single solitary factor, I guarantee that you’re doing nothing but making it worse; so read carefully.

Chances are, your world is burning.

I mean the true world, the world within yourself. Because when all the cards are down, that’s the world that matters most to you. It’s where you rest, it’s where you shit, and it’s where you eat. In other words, it’s what constructs the immediate physical realm that you operate within.

More importantly, it’s the realm in which your ideas, and choices spew forth from.

My friend, your inner-world is in turmoil because it awaits the return of the Halithaz. And if you haven’t been paying attention, that’s the :Hero:

The carrier of the shining blade, whose blow, whose touch, whose existence will liberate the land.

Within your inner-self resides many archetypes. Depending on who you are and how you were raised, certain powerful pieces might find themselves ruling your inner-realm.

Some are far more desirable than others. I shouldn’t even have to give examples.

What I will do is tell you that you must find your grove, and sprout the seeds of your life’s most important principles.

You must guard these with your life, and tend to them often.

This should now be the holiest, most powerful area within your mind. It is from this area you must construct a castle; and from there a Kingdom.

All must spread outward, and mimic these sacred trees. Lest your kingdom be built on lies.

It could be that you already had a kingdom. I do not judge. I just ask you reclaim it now.

The peasants will find out, and your less-desirable archetypes will find your weaknesses. Once more throwing your kingdom into ruin.

The inner you is a gnarled figure. He has seen much darkness, and he wears the armor and scars to prove his descent into the darkest areas of your mind and world.

This is your lowest self, understanding he is worth more.

This is your lowest self, taking to the throne in hopes of the resurrection of your highest hopes and dreams.

What I’m about to reveal to you are personal archetypes that I have found to be paramount in the courtroom of the Wolfhead Rex. You will notice many things about this. But first, I will let you observe. 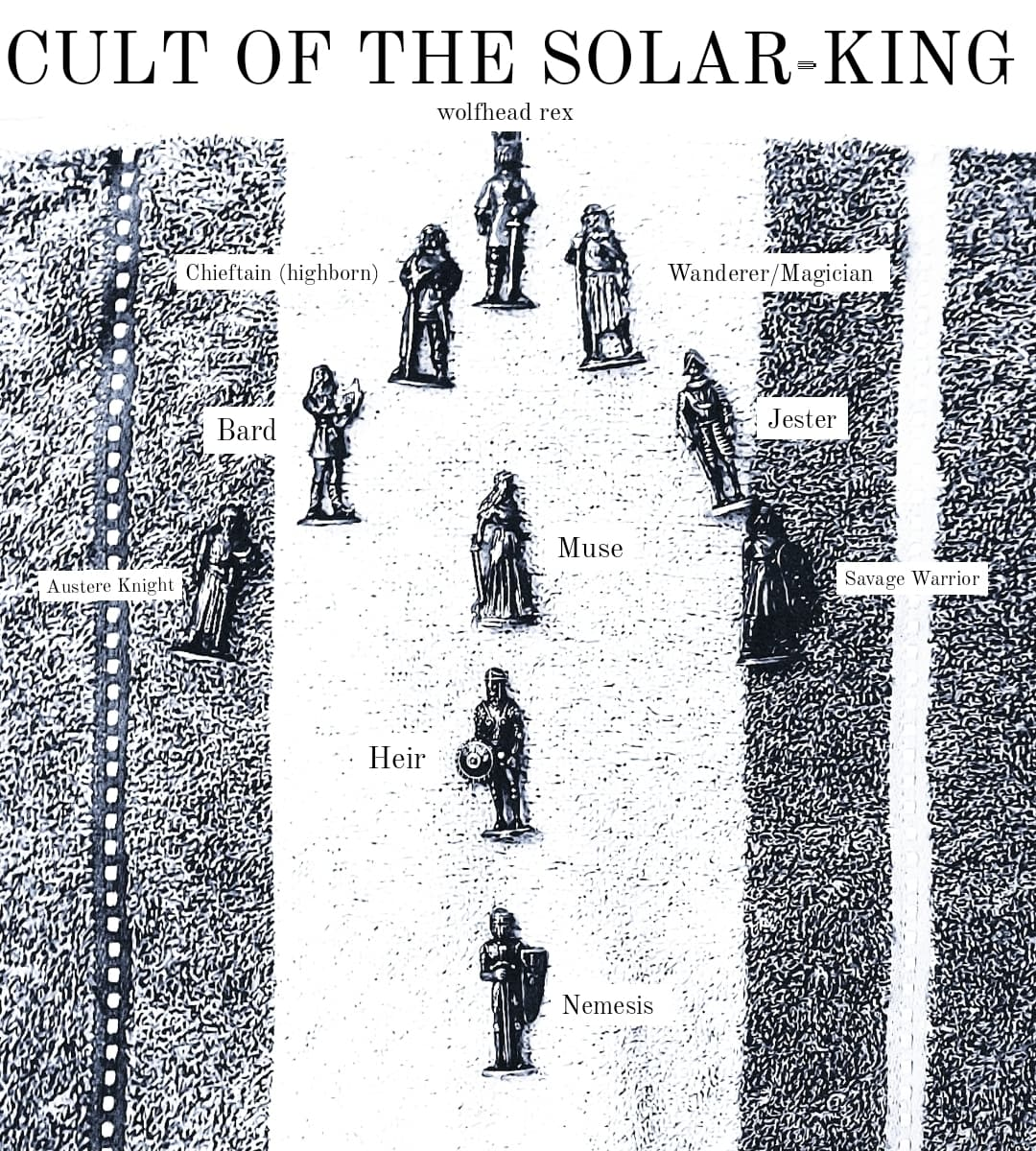 This is the courtroom, within are the powerhouse archetypes that have existed in Gods and men since the dawn of time, and most certainly before. It is up to you to find your Wolfhead Rex. You must be the light that proves to him God exists.

He will hear the call of :The Solar King: and he must take to his rightful throne in the kingdom of ruin.

He has much to do. The Cult of The Solar King must assemble. Next time I will tell you of their roles.
More soon.