The forest and water are so closely interconnected. If you remove the forest, you remove the water at the same time. If you destroy the forest you destroy the water because instead of flowing in coolness under the shade of trees which is the way nature ordains the water to flow, it flows out into the sunlight and loses its energy. Watercourses are shaped by winding curves and shaded banks to protect itself from direct sunlight and its low temperature and natural flow are the condition necessary for water to preserve its supportive and carrying strength. 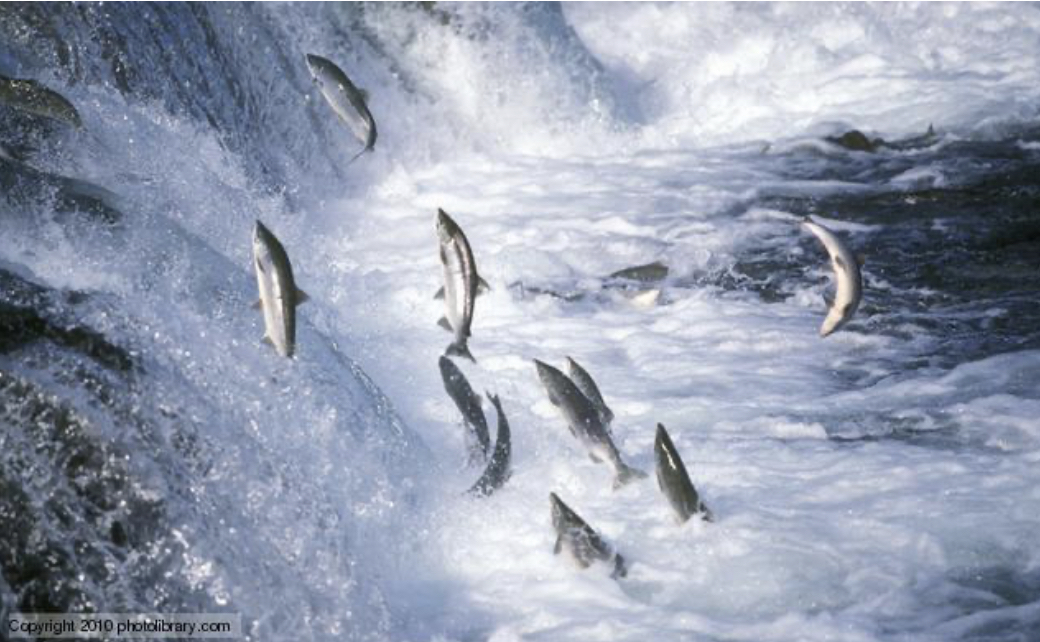 Viktor Schauberger concluded that a natural watercourse allows for a natural buildup of energy. The trout uses this energy, which flows in the opposite direction of the water, when jumping high watercourses in the moonlight. When looking at a waterfall, you can distinguish this energy flow as a natural channel of light within the stream. This whirlpool of energy is instinctively sought out by the trout to suck them upwards and over. Schauberger witnessed this phenomenon repeatedly and came up with new ideas of motion:

“I did not trust my generally observant eyes anymore, when suddenly an almost head-sized stone begun to move in a circular path in the same way as a trout before leaping over a waterfall. The stone was egg-shaped. In the next instance the stone was on the surface of the water, around which a circle of ice quickly formed. It appeared to float on the water surface, lit by the full moon. Then a second, a third, followed by other stones in sequence went through the same movements. Eventually nearly all the stones of the same egg shape were on the surface. Other stones of irregular or angular shape remained below and did not move. At the time I naturally had no idea that it was a case of synchronicity of events, leading to a unique form of movement. This movement overcomes the force of gravity and allows the stones of regular shape to come to the surface of the water.”

He experimented with the concentric spiral movement in both water and air and showed that levitation is possible when the speed of the spiral is rather fast. 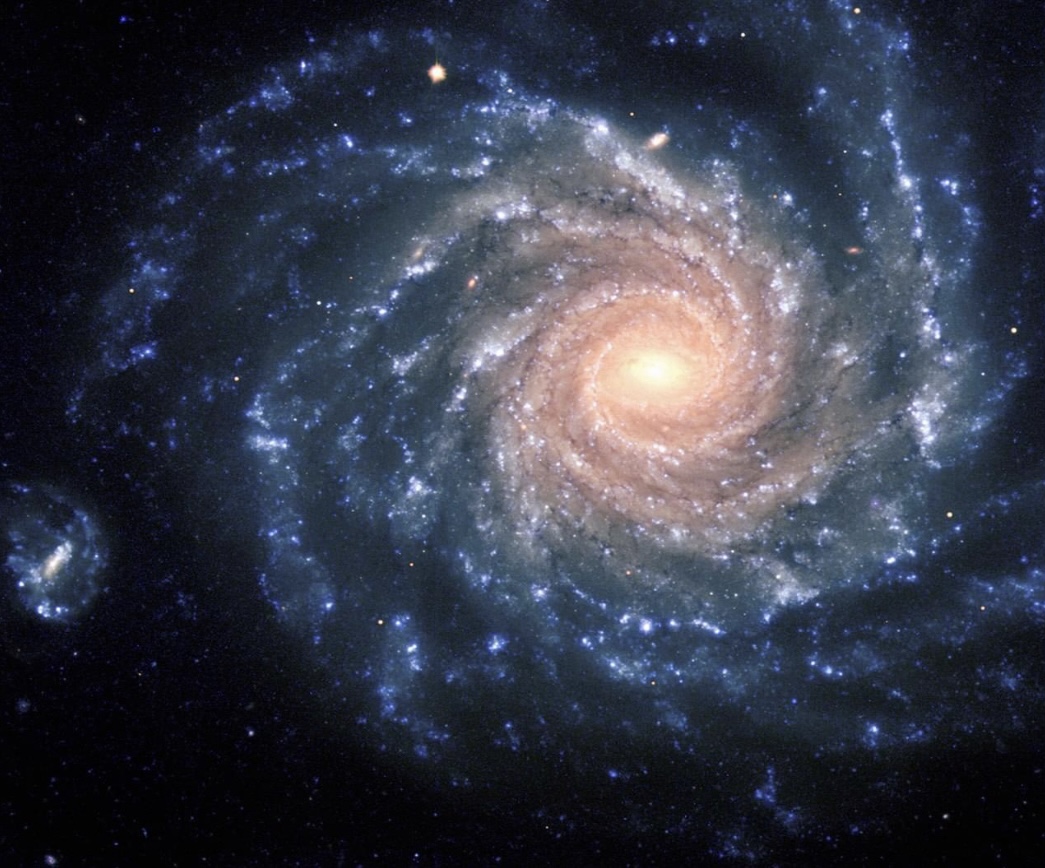 A hyperbolic spiral is externally centripetal, and internally moves towards the center. We find it abundantly in nature, in water’s natural flow, as well as blood, and sap. We may observe the hyperbolic spiral in macrocosms in the forming of a galaxy, where the energy from the periphery rotates towards the more dense center, or in microcosms like DNA molecules that have a double spiral structure. Centrifugal force occurs in nature destructively, to dissolve energy and break up a medium. Nature uses this force to disintegrate that which has lost its vitality, or has in essence, died. Biotechnology using this sort of movement causes upheaval and poor results. Schauberger recognized this and sought to invent new technologies with hyperbolic concentric motion, which nature uses to build things up. The centripetal hyperbolic spiral movement causes falling temperatures, contraction, concentration, implosion and biological improvement, and in nature it switches back and forth continuously with centrifugal movements, rising temperatures, heat expansion, explosion and biological decomposition.

“In the Scandinavian Eddas, the honey dew, the fruit of the gods and of the creative busy Yggdrasill (bees), falls during the hours of night, when the atmosphere is impregnated with humidity; and in the Northern mythologies, as the passive principle of creation, it typifies the creation of the universe out of water: this dew is the astral light in one of its combinations, and possesses creative as well as destructive properties.”

But there can be no development, without growth. 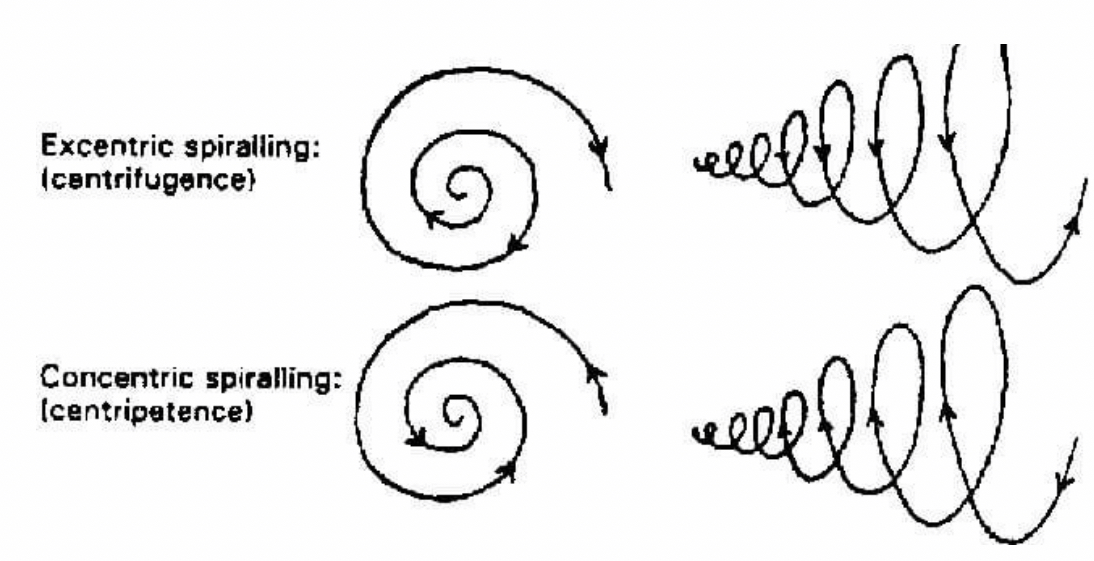 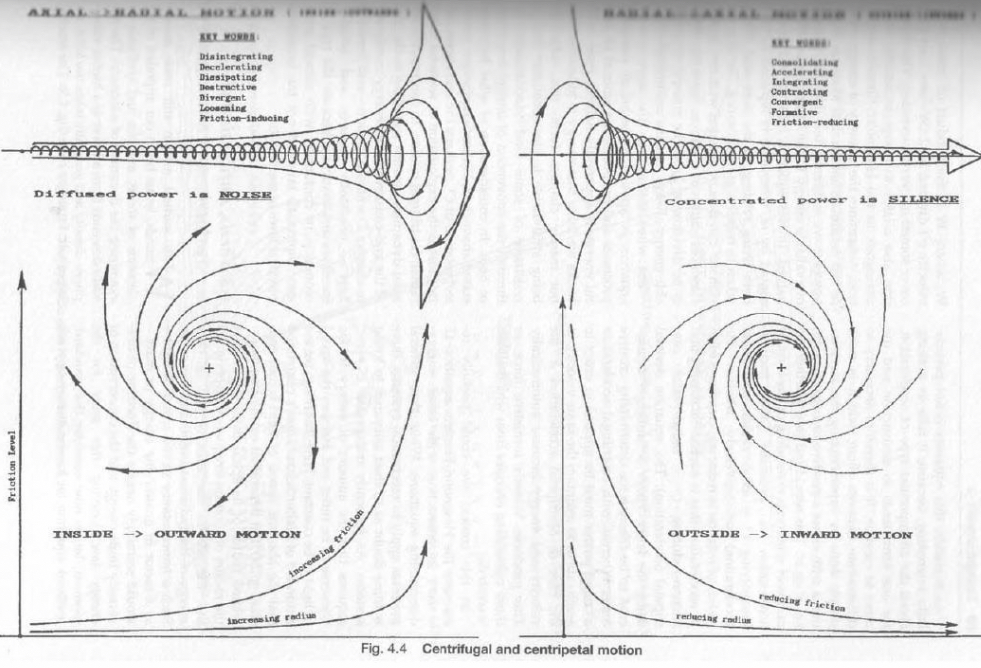 To grow and build, there is a sequence of charging/discharging energies, and a balancing of these charges between the voltages of the atmosphere and the earth. To utilize this charge, there must be insulation between each varying polarities, otherwise you’ve essentially got a short circuit. Schauberger described it as “a skin that the earth must have around it.” This is why it is of utmost importance that the forest not be stripped bare; the covering of vegetation acts as that skin. It is also a key to the origin of our race. Just as the flowing water relies on the vegetative covering of the world, so too was it the case with the birth of the first modern Europeans, where during the times of the extreme cold of the Ice age by which our earliest ancestors evolved in Europe also relied, where through the arid glacial climate, the small patches of coniferous forests clung to the flowing water bodies in the river valleys and rock overhangs that acted as the roads for the fall reindeer migrations and grazing spots of mammoth and aurochs; places where our first forefathers set up winter camps for the local clans and conducted the mass seasonal hunts that our people relied on for survival. It is here along the flowing water of melted Ice between the vast stretches of tundra steppe where all life congregated for survival in the harshest condition of the last glacial maximum and where the terrain of the continent had the most powerful influence on the evolution of life.

Our bodies are mostly made up of water, and that same water that replenishes us will again be returned to the earth. Our energy is the same, because energy cannot be created out of nothing. There is an eternal recycle of energies. Consciousness is, therefore, given to us temporarily by the permanence of the ether of the cosmos. Water is a psychically chargeable medium, as is any vital liquid, like blood. Fluids carry the life force and act as a bonding medium for spiritual conceptions. Representing the Well of Wyrd, Laguz holds all the secrets of the unconscious and the collective or universal knowledge. It is the astral ether, a fluid existing beyond the range of human senses, a flowing current, an ocean of the cosmos full of charged, powerful particles. Laguz is the universal ocean, of past, present and future. The human unconscious lingers beneath its surface, and we must dive deep to bring it to the surface of our conscious mind.

When a river is forced by its natural terrain to flow through narrow sections, the velocity is much higher through the narrowest points. You can do this by artificially narrowing a river’s bed, or introducing a longitudinal vortex. Water naturally tends to form vortices, especially with the influence of gravity accelerating its flow. The axis of the spinning motion coincides with the way the water flows. Not only do they increase velocity, but they decrease temperature, and increase density. As the vortex develops, the water cools, shifts and grinds sediment, thereby becoming infused with trace elements and nutrients, while at the same time building up its internal charge of pure energy. As the vortex approaches the ford, the flow decreases, the water warms slightly and begins to deposit its store of trace elements and nutrients and at the same time, prior to beginning its vortical rotation in the opposite direction, radiates its accumulated charge of pure, life enhancing energy into the environment along a plane perpendicular to the direction of flow. Schauberger called it the “Energy Cannon.” However, if the life energy of the riverwater has been badly degraded due to faulty methods of river regulation, then instead of longitudinal vortices, vertical vortices develop, which radiate life-destroying energies laterally into the surroundings along a horizontal plane. We can observe natural vortices in a water faucet. As the water picks up speed, it will form a funnel shaped vortex. 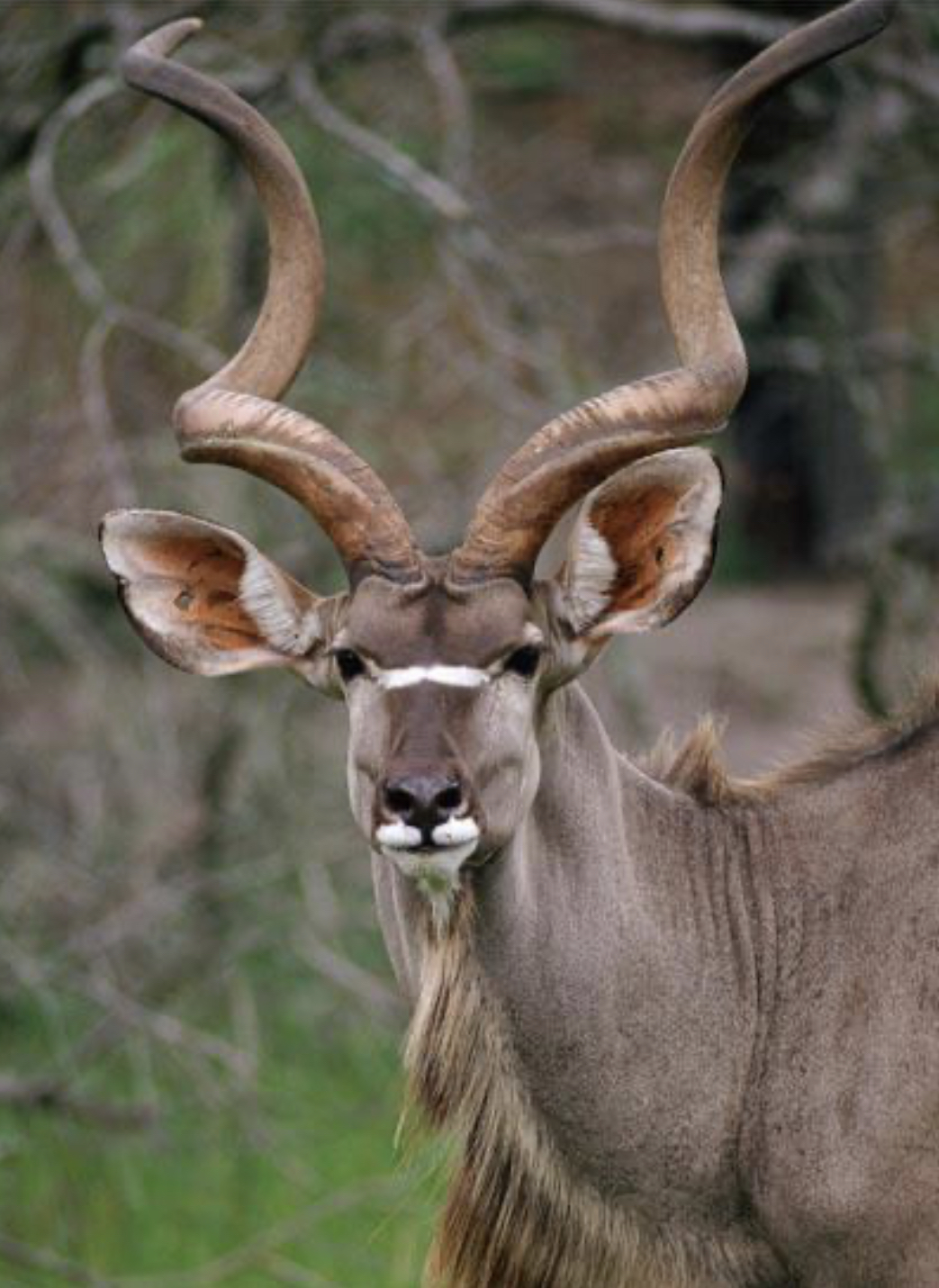 Under a microscope we can see that the implosion vortex has a cleansing effect, and that the water is more homogenous than it is before passing through the vortex. This means it will have a better biological effect on all living organisms: plants, animals and human beings. It is important that we work with what nature has so clearly shown us. Chlorination and other chemical and artificial processes need to be eliminated from our drinking, bathing and agricultural water. When having water flow through pipes we must utilize a proper form. Schauberger found that the shape of the kudu antelope’s horns, another example of double spiral structures provided by nature, was the correct form for water transmission.

The secret of life is dipolarity. Without opposite poles in nature there is no attraction and repulsion. Without attraction and repulsion, there is no movement; without movement, there is no life. It is thus, that Laguz is the ebb and flow of life, our dark and light currents. The most important fact about all of Schauberger’s theories, is that we must work with the building processes nature has already provided us with. The central stave of Laguz is Isa, and we can easily see this as the melting of ice, the result being the flow of water, the natural bending of the life-energy. When Laguz is revealed to us it means thus: that only by attuning to creation will your life

truly flow as it is meant to. Emotional balance comes from harmony with creation around you, just how we must work with water’s natural centripetal movement, spiraling inward, to build and grow. It is exactly why a merkstave Laguz means you have corrosive and destructive elements in your life, as centrifugal forces, spiraling outward, work to dissolve and dissipate that which is dead. We must remember not to view merkstave as negative, but as a reminder to connect with the energies around us and use the flow to our advantage. 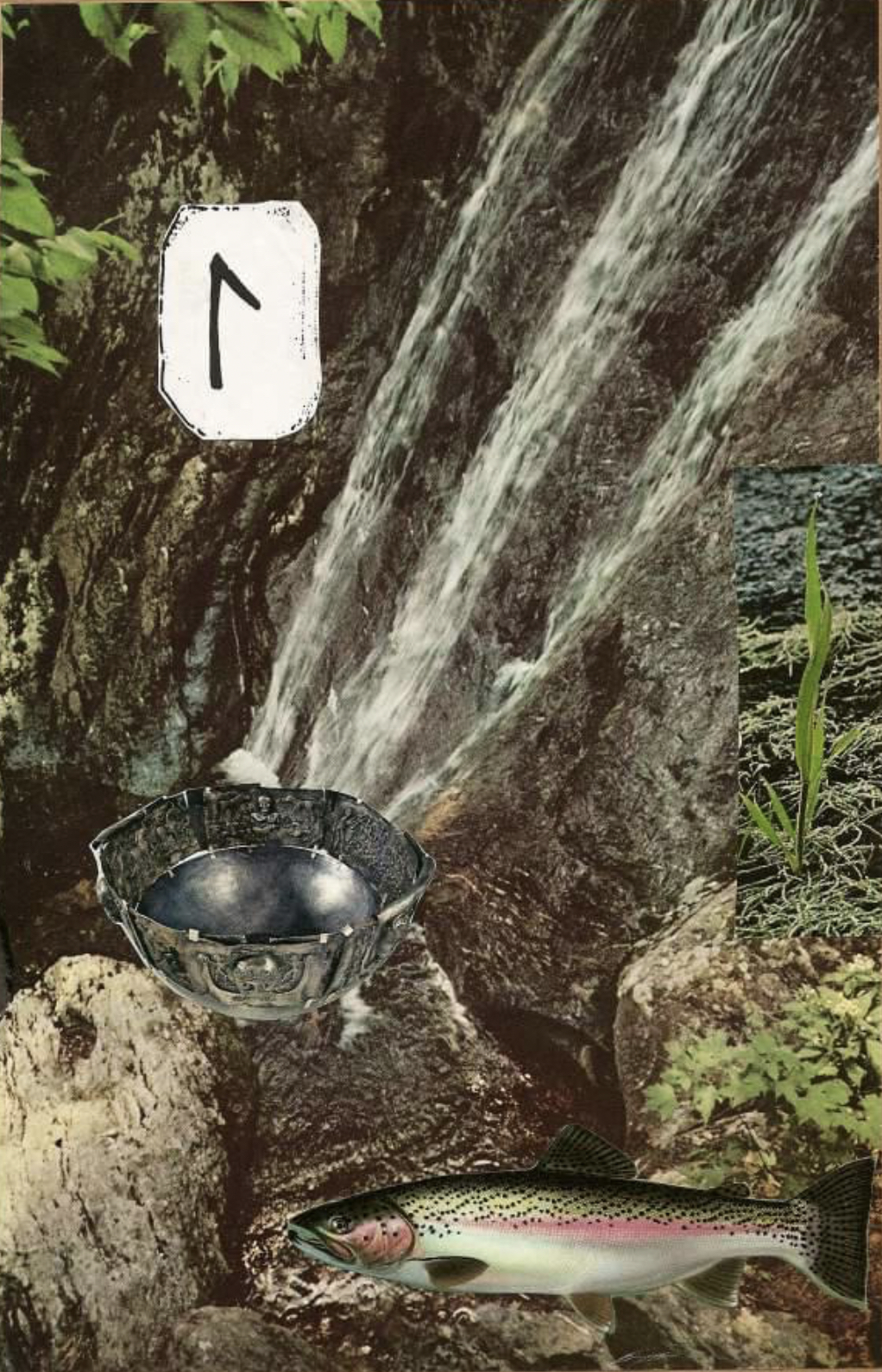